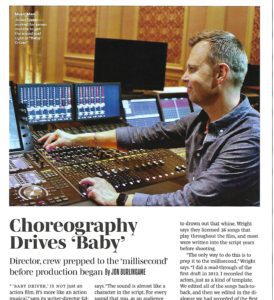 An unexpected Variety assignment turned out to be the most fun in weeks: I was asked to interview the director and sound designer for Baby Driver as part of Variety’s “Oscar Innovators” series, which ran in a special issue on Thursday. Director Edgar Wright corrected me at the very start — this wasn’t a film that was edited to music but rather choreographed to it. Sound designer Julian Slater, who is up for Oscars in both sound editing and sound mixing categories, explained what he had to do and why the job was so complicated.