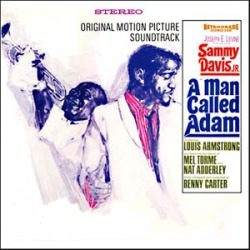 After more than 40 years as a professional journalist, more than half of that specializing in film and TV music, I try and take those assignments that appeal to me. This was one I really wanted to do. It’s not widely known that Benny Carter was the first African-American composer to achieve screen credit as a composer for TV, and one of the first half-dozen to make it in feature films. A Man Called Adam (1966) was Carter’s first film score (although he had contributed arrangements to many prior to that) — fittingly, about a jazz musician (played by Sammy Davis Jr.). This is a straight CD issue of the Reprise LP, but it was a chance to write about this groundbreaking, seminal musician. He was a soft-spoken guy (we last saw him at David Raksin’s 90th birthday party, where he was the only attendee older than David) and a delight to interview.