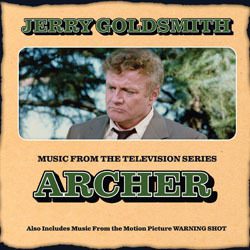 This was long in the making. There were only six episodes of this 1975 TV series starring Brian Keith as Ross Macdonald’s L.A. private eye, but the theme (and pilot score) was by the legendary Jerry Goldsmith — so naturally I audio-recorded one episode for posterity. When the original recording sessions were unearthed 40 years later, I asked to write the notes — and I dug out my old reel-to-reel tape of that forgotten NBC show. Goldsmith was doing a lot of TV in that era (Barnaby Jones, Hawkins, Police Story, etc.) and in fact this was the last hour-long series television episode he would ever score. My notes explore the backstory of the series, why it didn’t last, Goldsmith’s involvement, and a bit about Warning Shot, the 1967 cop drama whose music is also featured on this album.