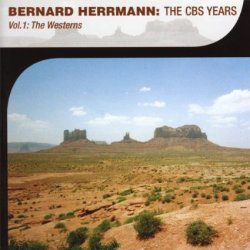 In 2003, Prometheus issued a pair of discs devoted to Bernard Herrmann’s contributions to music for CBS Television in the 1950s and early 1960s. These had originally been issued on LP on the old Cerberus label and were assembled from tapes in the CBS music library. Volume 1 included his music from the pilot of the classic Richard Boone Western Have Gun Will Travel, an episode of Gunsmoke and three suites of library music. Volume 2 offered music from three unsold pilots (including the cult favorite Collector’s Item with Vincent Price and Peter Lorre) and suites from three CBS radio scores (including the 1956 Brave New World). This was a fun assignment courtesy of producer Ford A. Thaxton.