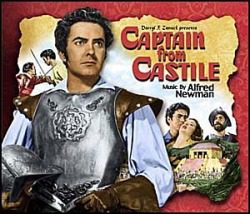 I’ve spent a lot of time researching Alfred Newman’s film music, so the opportunity to explore his classic Captain From Castile in depth was a joy. This 1947 score, rich in Spanish colors and rhythms, was originally released on 78 rpm discs, then in LP form, and excerpted in a beautifully recorded suite as part of Charles Gerhardt’s RCA series. This 2003 release was the first to showcase the entire score. My old friend Rudy Behlmer — who joins me on the commentary track on the DVD — also contributed notes, as did fellow historian Ray Faiola.