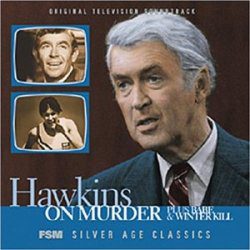 This was an instance where I asked to write the notes. Jerry Goldsmith did a lot of television, especially in the early 1970s, and these were three TV-movies from that part of his career: Hawkins on Murder (1973), pilot for the short-lived James Stewart lawyer series; Winter Kill (1974), an unsuccessful pilot with Andy Griffith as a sheriff; and Babe (1975), with Susan Clark as the famous athlete Babe Didrikson Zaharias. Norman Felton, Goldsmith’s producing colleague dating back to the 1950s, made both Hawkins and Babe; Goldsmith won an Emmy for the latter and it remains one of his most touching television scores.