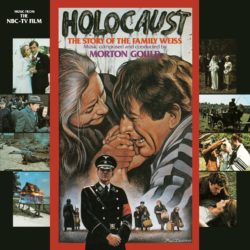 One of the most important miniseries in television history, the Emmy-winning 9 1/2-hour Holocaust, was the first TV production to focus specifically on the rise of Nazism and the Third Reich’s “final solution” to murder six million Jews. The producers hired Morton Gould, one of America’s most distinguished composer-conductors, to write the score (his music for CBS’s 26-part World War I series remains one of the greatest documentary scores ever penned for the medium). It was an honor to write the notes for the album, drawing on my 1992 interview with the composer; although a Grammy-nominated LP in 1978, it had not previously been available on CD.