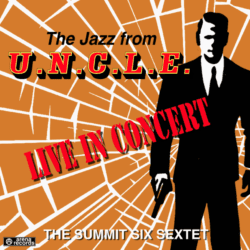 In September of 2014, the classic spy series The Man From U.N.C.L.E. celebrated its 50th anniversary with a weekend of U.N.C.L.E.-related events in Culver City, Calif., where the Robert Vaughn-David McCallum adventure was filmed in 1964-68. The event was capped with a live performance of music written for the show by a great six-piece jazz band, and it’s no exaggeration to say that — as host and, with my good friend Robert Short, one of the producers — it was one of the greatest nights of my life. We recorded it, and it’s now available on CD: live concert performances of terrific, fun, romantic and exciting U.N.C.L.E. music by Jerry Goldsmith, Lalo Schifrin, Gerald Fried and Robert Drasnin, in many cases playing the original arrangements for the first time since they were recorded 50 years ago. Here is a lot more about it, and information about how to order.