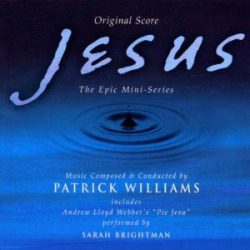 Patrick Williams is not only among my favorite composers, he’s among my favorite people. I’ve admired his jazz, his film scores, and his symphonic compositions, since the early 1970s. We worked together at the Henry Mancini Institute (I wrote all the notes for their movie-music evenings) and he asked me to write the notes for his score for this miniseries retelling of the story of Jesus (which aired over four hours on CBS in May 2000). I admired the reverence and restraint of his score.