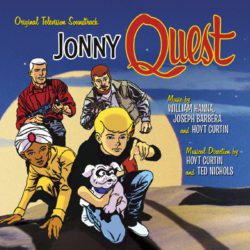 One of my proudest accomplishments this year: unraveling the previously untold backstory of the music for Jonny Quest, arguably the greatest animated adventure series in TV history. Originally produced for prime-time by Hanna-Barbera (the people behind The Flintstones, The Jetsons and many other popular ’60s cartoons) and designed by genius artist Doug Wildey, the series lasted only one season on ABC but reran seemingly forever, especially on Saturday mornings. Those of us who grew up in the ’60s never forgot it (I still have a Jonny Quest poster on my office wall). The thrilling music, by veteran H-B composer Hoyt Curtin and newcomer Ted Nichols, remains an indelible part of our collective childhoods. In addition to chronicling the saga for La-La Land’s 2-CD set — its first official release, in spectacular sound — I served as album consultant, having done the research (including tracking down cue titles, recording dates and musicians’ rosters) some years back.