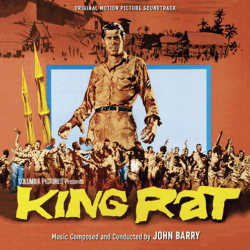 I am always delighted to hear about the unearthing of rare John Barry tracks. Intrada Records’ intrepid producer Douglass Fake discovered that Barry’s original Hollywood recordings for the score of Bryan Forbes’ film King Rat were filed away with the London re-recordings that were issued as the soundtrack album in 1965. His new remastering of that classic Mainstream LP is accompanied by all of the original music recorded for the film. I had interviewed both Forbes and Barry about this music many years ago, and it was wonderful to be able to incorporate those conversations into new notes for this CD.