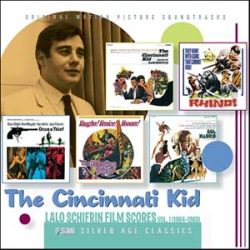 Lalo Schifrin at MGM in the ’60s

The official title is The Cincinnati Kid: Lalo Schifrin Film Scores Vol. 1 (1964-68) but, unfortunately, there was never a Vol. 2. I am stunned that this is now out of print and worth nearly $400 on the open market. But the reason for that may be that this is some of Lalo’s most fun music for movies in that era. There’s the bluesy touch of his classic Cincinnati Kid, the jazzy Once a Thief (including his Verve LP that features Man From U.N.C.L.E. tracks), and my two favorites, which star U.N.C.L.E. actors Robert Vaughn and David McCallum, respectively: The Venetian Affair (1967) with its mysterious cimbalom sounds, and Sol Madrid (1968) with its alluring Latin tracks. Another reminder that sometimes great scores come from not-so-great films.