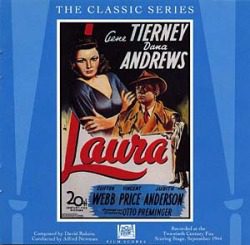 The launch of Fox Records’ “Classic Series” in 1993 was cause for real excitement. It was a major-studio initiative to find and restore, then create albums of, previously unreleased film music. They started at the top with a double bill of David Raksin’s Laura (27 minutes of the Alfred Newman-conducted original) and Bernard Herrmann’s Jane Eyre. Producer Nick Redman asked me to write something about Laura; Herrmann biographer Steven Smith (of course!) wrote Jane Eyre.