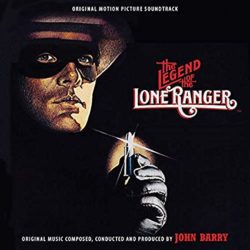 The Legend of the Lone Ranger

As many of you know, one of my special interests over the years has been the music of composer John Barry. He scored just four Westerns during his career. I first met him while interviewing him about one of those, his eventual Oscar winner Dances With Wolves, for Premiere magazine. But in the early 1980s he scored another one, The Legend of the Lone Ranger, and it was a pleasure to write the liner notes for this first-ever CD release of the 1982 LP. Country legend Merle Haggard sings the ballad, “The Man in the Mask,” and lyricist Dean Pitchford contributed some eye-opening reminiscences in a new interview for my essay.