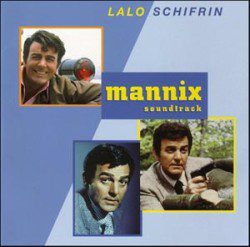 In 1999, Lalo and Donna Schifrin asked me to pen the notes for their re-recording of his music for the long-running private-eye series Mannix. In addition to the 11 tracks on the original 1968 LP, Lalo wrote four new tunes to bring the running time up to a more CD-friendly hour’s length, then recorded them with Germany’s phenomenal WDR big band. It gave me a chance to talk with the composer about producer Bruce Geller’s ideas for the music… and to ask series star Mike Connors about it: “I used to walk down the street and people would hum the theme at me. Lalo’s terrific, and his music is sensational,” he said. It’s a terrific album and I am proud to have contributed a little something in terms of context.