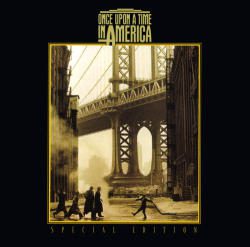 Once Upon a Time in America

This was an exciting project, as it marked the first expansion of Ennio Morricone’s memorable, should-have-been-Oscar-nominated score for Sergio Leone’s final masterpiece. The LP had been 49 minutes, but this CD was nearly 75, including early demos and themes written but not used in the score. The label disliked what I wrote (producer Nick Redman had to fight to keep it) but I was proud of the piece, as it chronicled the entire project and its landmark score for the first time since Morricone composed it in 1984.