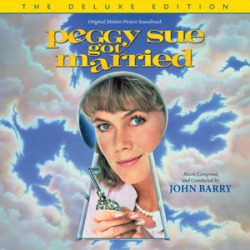 The third of three films that composer John Barry did for producer/director Francis Ford Coppola, this 1986 release starred Kathleen Turner and Nicolas Cage in a fantasy about a stressed-out mom who seemingly travels back in time to her high-school days and faces the possibility of altering her own destiny. I love Barry’s romantic scores from the ’80s (including Somewhere in Time, Body Heat and Out of Africa) and it was a pleasure to contribute notes to this first-ever complete release of his memorable music for Peggy Sue.