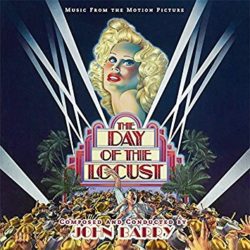 The Day of the Locust

One of composer John Barry’s most prestigious assignments was the 1975 adaptation of Nathanael West’s nightmarish vision of 1930s Hollywood, The Day of the Locust, by the Midnight Cowboy team of director John Schlesinger, writer Waldo Salt and producer Jerome Hellman. I was delighted to write a 3,000-word essay on the film and its terrific score. One of the highlights of this album (considerably expanded from the original LP) is the addition of newly discovered recordings of a song based on Barry’s nostalgic theme, with three different Don Black lyrics, that went unused in the original film. I did new interviews with Hellman and Black for the essay.