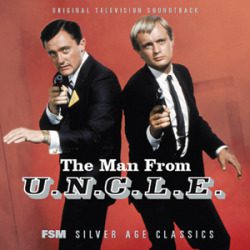 This was the project of a lifetime. The 1960s spy classic is still my all-time favorite TV series; over the years I had interviewed many of those involved with the show and often written about it. I worked on an album concept for more than a decade before all of the pieces finally fell into place. The idea, of course, was a “best of” collection, so I boiled down 19 of the best scores into suites ranging from four to 14 minutes apiece. The composers included Jerry Goldsmith, Mort Stevens, Walter Scharf, Lalo Schifrin, Gerald Fried, Robert Drasnin and Richard Shores. At the time, we had no idea how well it would be received (so you won’t see “Volume 1” on the cover!). It sold so well that we did three subsequent volumes of U.N.C.L.E. music.

Together, the liner notes for these four volumes constitute the most comprehensive history of the scoring of a single television show ever written. Even the venerable Down Beat magazine gave us four out of five stars! Here‘s another very upbeat assessment.