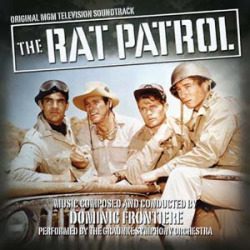 I’ve written the notes for both volumes of this Dominic Frontiere score for the popular World War II series (1966-68). I watched the show as a kid and still have fond memories of those Jeeps sailing over North African sand dunes (although they were really in Spain and Arizona). The first CD is a really nice sampling of music, including an unreleased version of the theme that was probably intended as a 45 rpm single. The second volume (released in 2014) contains more Frontiere but, of special interest, the previously unknown Alex North score for the pilot (which he subsequently re-used as his theme for The Devil’s Brigade).