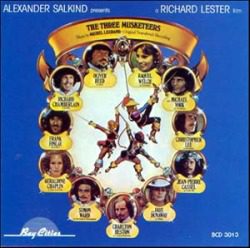 This is the Michel Legrand score for director Richard Lester’s 1974 retelling (which I happen to think is, paired with its Four Musketeers sequel, the best version of the Alexandre Dumas tale ever put on film). And the Legrand score is just exquisite: swashbuckling, romantic, exciting. I must have played “To Love a Queen” over and over when I acquired the original Bell Records LP after seeing the film. I have a soft spot for this now-rare CD because producer Bruce Kimmel gave me my first opportunity to write liner notes for the initial compact disc release.