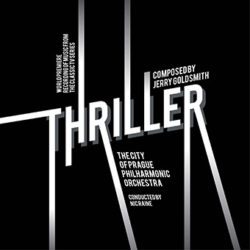 From 1960 to 1962, horror-movie legend Boris Karloff hosted an hour-long anthology of tales of terror titled Thriller, produced by Revue (later Universal Television) and aired on NBC. Jazz great Pete Rugolo scored many of the first-season episodes and even released a wonderful LP of those themes in 1961. When a change in producers led to a fresh musical approach, Jerry Goldsmith succeeded Rugolo, composing 16 remarkable scores for some of the best, and scariest, episodes — a worthy followup project to his classic Twilight Zone scores for CBS. Producer James Fitzpatrick supervised a reconstruction and re-recording of six of these, and the result is a Thriller album of classic Goldsmith. I was pleased to recount Jerry’s history with the series — along with considerable musical detail about the scores — in a 2,200-word essay for the booklet (printed in glorious, and appropriate, black-and-white).