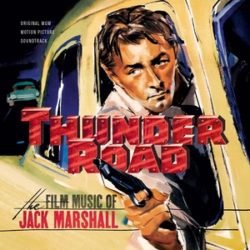 One of the all-time great “B” movies is Robert Mitchum’s 1958 Thunder Road, the story of bootleg whiskey makers in Tennessee and their efforts to outrun the federal agents who pursue them and outwit the crime syndicate that wants to take them over. And when I say “Mitchum’s” movie, it’s not just an acting performance — he came up with the story, produced it, and even co-wrote and sang the theme song that became as famous as the movie itself. This first-ever release of the Thunder Road score features Jack Marshall’s guitar-dominated, country-flavored music for the film, plus two other Marshall scores from that era (Take a Giant Step and The Rabbit Trap). The composer would go on to greater fame with the 1960s theme for the TV comedy The Munsters. I penned the notes for this album, alongside tributes by composer John Williams (a longtime friend and colleague of Marshall) and producer Frank Marshall (the composer’s son).