I was honored to be asked by conductor Leonard Slatkin to consult on, and then participate in, a six-night festival of film music with the National Symphony Orchestra in Washington, D.C. On Jan. 24 I led a discussion of the McCarthy era and its impact on Hollywood; the next night, Slatkin and I were joined by composer John Williams and director Stanley Donen; and on Jan. 31 I talked about the restoration of Metropolis with producer John Goberman. Part of the fun for me was not only writing the program notes but helping design a multi-page timeline of great moments in film-music history. Here is an overview of the festival. 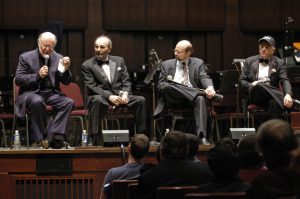