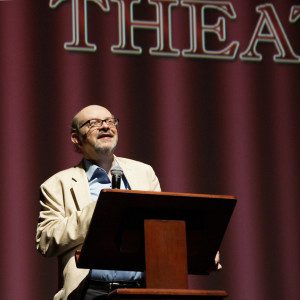 With the support of Elmer Bernstein’s family, I have been asked to curate a five-film festival of classic movies scored by the great American composer. We launched the season Monday night at Santa Barbara’s beautiful Granada Theatre with a screening of Sweet Smell of Success (1957), among the most powerful of all of Bernstein’s jazz scores. The film, of course, overflows with brilliant dialogue (courtesy of Clifford Odets and Ernest Lehman), much of it spoken in tense, confrontational moments involving powerful newspaper columnist Burt Lancaster and desperate press agent Tony Curtis. Still to come in the series: True Grit (Nov. 16), Hawaii (Dec. 7), Airplane! (March 7) and The Age of Innocence (May 9). Join us!