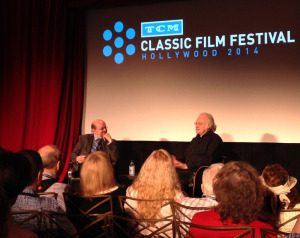 Carl Davis has composed a new score for the 1923 Harold Lloyd classic Why Worry? at the TCM Classic Film Festival and the Turner folks very kindly asked me to conduct an hour-long interview with him yesterday at the Hollywood Roosevelt Hotel.

Carl, who is American but has been based in London for many years, has had a long and distinguished career writing for all kinds of movies and TV but has specialized in silent films. He explained the process and some of the technical complexities involved, and regaled the audience with anecdotes about working in the business for so long. (Here are some highlights from the conversation.) On a personal note, I was able to chat with him about his side specialty, conducting concerts of James Bond music in England and across Europe (he is quoted in my book The Music of James Bond).

He conducted 18 musicians that evening, live to picture, at the Egyptian Theatre down the street. True to form for this veteran composer, the score brightened, propelled, and lent additional humor to the film.