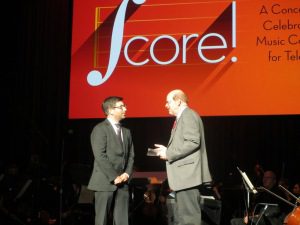 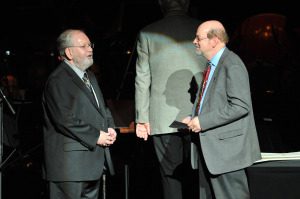 I’ve participated in many concerts over the years, but few can compare with the extraordinary evening of television music we did at UCLA’s Royce Hall Wednesday night. I was honored to host, and to conduct on-stage interviews with the likes of John Lunn (Downton Abbey), Alf Clausen (The Simpsons), Sean Callery (Elementary), James S. Levine (American Horror Story) and Walter Murphy (Family Guy).

A sold-out audience got to hear music by all these composers, plus Jeff Beal (House of Cards), Bear McCreary (DaVinci’s Demons), Trevor Morris (The Borgias) and Ramin Djawadi (Game of Thrones). One of my favorite moments was introducing Wendy Melvoin and Lisa Coleman (Nurse Jackie) and declaring that they are “leading the way for the next generation of women composers in Hollywood.“ Here is a rundown of the evening; here’s Variety’s story; and here’s another one from the TV Academy itself with more fun photos.