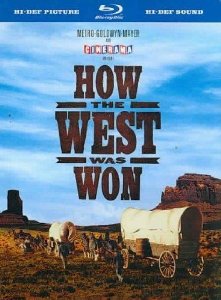 How the West Was Won

I was privileged to share the commentary booth with film historian Rudy Behlmer, Cinerama expert Dave Strohmaier, and stuntman Loren James on this one. As usual, my realm of expertise was the score, in this case Alfred Newman’s Oscar-nominated music, and it was a thrill to delve into the research. The history is fascinating, as Dimitri Tiomkin had started it but had to back out, and lyricist-choral director Ken Darby joined Newman on the assignment, which involved not just new songs but also plenty of 19th-century folk material.