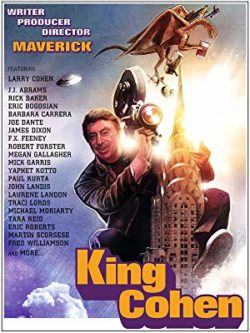 When friend and filmmaker Steve Mitchell asked me to contribute to his documentary on maverick director Larry Cohen, I couldn’t resist the opportunity. I’m really just a small part of the grand canvas of this informative, very entertaining film — Mitchell wanted me to talk about the major composers who contributed to his films: Bernard Herrmann (It’s Alive, 1974), God Told Me To (Frank Cordell, 1976) and Miklos Rozsa (The Private Files of J. Edgar Hoover, 1977). It was great fun delving back into that lively, risk-taking era of American moviemaking, and discussing Cohen’s love for these major composers in the twilight of their careers.