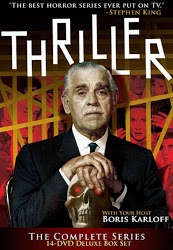 I was unfortunately limited on time when producer Steve Mitchell called and asked me to do some music commentaries for this complete release of television’s Thriller (1960-62). But I made time for two: “The Terror in Teakwood” with its miniature piano concerto and Jerry Goldsmith score; and “La Strega,” with music by Morton Stevens, the series’ other mainstay (after that misguided first half of the first season, despite fine scores by Pete Rugolo). It was great fun, and I was delighted to read one commentator say we made the 50 minutes “fly by.”