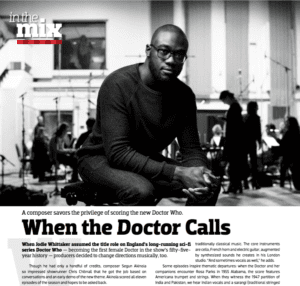 The casting of the new Doctor Who — Jodie Whitaker, who is wonderful as the first female doctor in the 55-year history of the BBC sci-fi serial — demanded a new musical approach, too. Producers recruited Segun Akinola, who holds a slightly different distinction: he’s the first person of color to score Doctor Who. I had a fascinating conversation with him about the joys and challenges of adding his unique voice to the long-running franchise; it appeared in Emmy magazine earlier this year and is now online here.