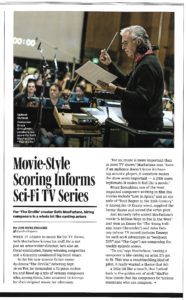 Writer-director-actor-singer Seth MacFarlane loves the orchestra — not just as backing for his albums and live musical appearances, but for his movies and TV shows too. He is a fan of classic movie scores and understands the value of real musicians helping to support the emotional needs of both drama and comedy. So for his new sci-fi series The Orville, debuting Sunday on Fox, he enlisted the services of three of the finest orchestral composers in Hollywood: Bruce Broughton, who scored the pilot and wrote the theme; Joel McNeely and John Debney, who are scoring the individual episodes. They are using orchestras of 60 to 70, which is much larger than the average TV ensemble these days. In this story for Variety, MacFarlane, Broughton and McNeely talk about the challenge and the fun involved.

A new film on the craft of creating music for movies, Score: A Film Music Documentary, opens this weekend in New York (and next weekend in Los Angeles). It features new interviews with composers including Hans Zimmer, John Powell, Quincy Jones, Brian Tyler, John Debney, David Arnold, Rachel Portman and others; footage from earlier films featuring John Williams and Thomas Newman; and commentary from critic Leonard Maltin, agent Richard Kraft, Disney executive Mitchell Leib, record producer Robert Townson, director James Cameron, and many more. I am on camera from time to time to offer historical perspective. Filmmaker Matt Schrader filmed numerous scoring sessions in Los Angeles and London, and the result is a fast-moving, illuminating look at the art and business of movie music. You’ll see me in the trailer, which is here along with the New York Times‘ rave review. 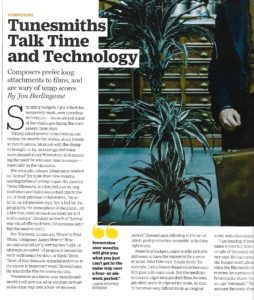 For one of its awards-related special end-of-year issues, Variety asked me to inquire of this year’s crop of potential score honorees about the challenges they face in a changing environment for composers in film. It was an interesting assignment, and I asked Johann Johannsson (Arrival), James Newton Howard (Fantastic Beasts), John Debney (The Jungle Book), Nicholas Britell (Moonlight), Alan Silvestri (Allied) and John Williams (The BFG) about time to compose, budgets, temp tracks, synth mockups and the controversial new practice of “striping” (recording different sections of the orchestra separately from one another).

John Debney is one of Hollywood’s finest composers and a really super guy to boot. I’ve known him for more than 20 years and his output contains many wonderful scores (as diverse as The Passion of the Christ and The Princess Diaries, not to mention Elf and Dreamer). On Monday I was pleased to moderate a discussion about the music of Disney’s The Jungle Book with Debney, original Jungle Book songwriter Richard Sherman, and director Jon Favreau. Debney and Sherman told surprising and funny stories about Debney’s youth, hanging around the Disney lot (his dad worked there) and meeting the famous Sherman Brothers in the mid-1960s. Favreau’s own comments demonstrated a genuine appreciation for Debney’s artistry. The Society of Composers & Lyricists audience was warm and welcoming. 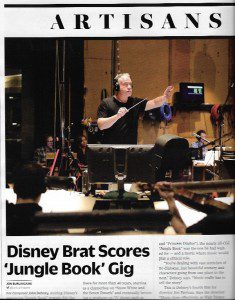 John Debney, the Oscar-nominated composer of The Passion of the Christ and many other scores from Elf to The Princess Diaries, had a dream-come-true assignment recently: scoring Disney’s remake of The Jungle Book. He practically grew up on the Disney lot, was best friends with the boy who voiced Mowgli in the ’67 animated version, and even knew the legendary Sherman Brothers (who wrote most of the songs). His symphonic score for the well-reviewed new film is masterful, and I got to talk with him — as well as director Jon Favreau — in this piece for Variety.

Here’s an interesting story about how technology has changed the entire film-music business. I talked to Thomas Newman, John Debney, Michael Giacchino, Mychael Danna, Alexandre Desplat and John Powell — none of whom use paper and pencil anymore.