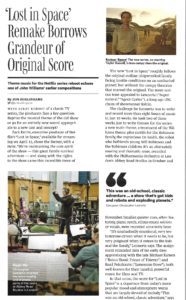 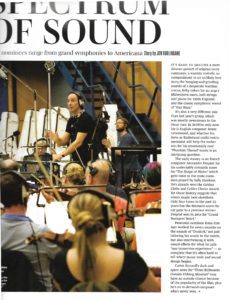 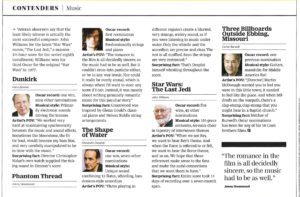 Every year Variety asks me to analyze the music races for the Academy Awards — not really handicapping them, as that entails choosing favorites, which I don’t like to do. But examining the five nominees, quoting the composers, hinting at what’s important about each, and subtly suggesting what Academy voters might be thinking. Alexandre Desplat’s The Shape of Water is the current favorite, but I think you cannot count out Jonny Greenwood’s Phantom Thread or Carter Burwell’s Three Billboards Outside Ebbing, Missouri. Hans Zimmer’s Dunkirk and John Williams’ Star Wars: The Last Jedi are admittedly outsiders at this point… but the Oscars love to surprise us. This story appeared only in print, so please click on the images to read it here. 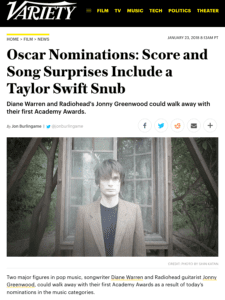 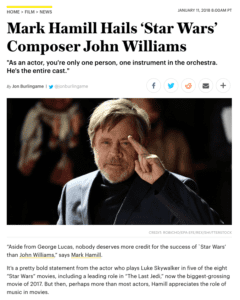 While I was preparing my John Williams piece for Variety, I had the good fortune to connect with actor Mark Hamill, who of course plays Luke Skywalker in the Star Wars films. He was so enthusiastic in his praise for the maestro, and waxed eloquent in his appreciation for film music generally, that I didn’t want to use simply one or two quotes in the Williams piece. Variety editors agreed, so here is the sidebar story in which Hamill talks about his history with classic film music, and Williams in particular. The New York Post picked it up the next day. 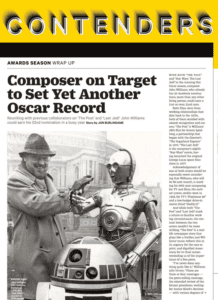 It’s always a treat to interview the legendary John Williams. A few weeks ago he talked with me about scoring The Post for longtime colleague Steven Spielberg; about his eighth Star Wars movie, The Last Jedi; and about his plans for 2018, which include a theme for Solo and a new concert work celebrating the centennial of Leonard Bernstein. I also interviewed Last Jedi director Rian Johnson, actor (and fan) Mark Hamill, and fellow composers David Newman and William Ross, about the iconic composer’s place in movie and music history. The story is in this week’s issue of Variety, including a collection of Oscar trivia related to the composer. In a separate story, I explore the maestro’s first animated short subject (which itself is also Oscar-eligible this year), Dear Basketball, based on the Kobe Bryant poem. 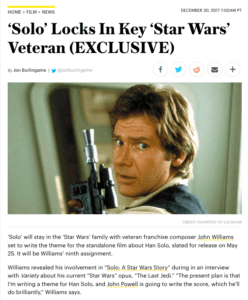 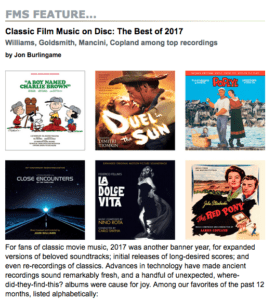 With the opening of The Post, Steven Spielberg’s new newspaper drama with its score by the legendary John Williams, I thought it might be a good time to look back at past movies with a newspaper setting and the music that accompanied them (and added a bit of information and commentary for each). So for this week’s online Variety, I found YouTube videos of music from Citizen Kane, Sweet Smell of Success, The Front Page, All the President’s Men, The Paper and Spotlight. Comments from composers Elmer Bernstein, David Shire and Howard Shore are included. 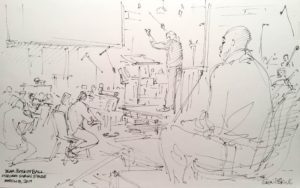