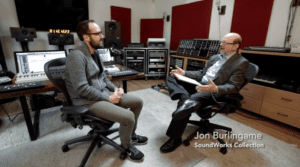 In this first video interview for SoundWorks Collection, I talk at length with composer Joseph Trapanese about scoring the summer hit Straight Outta Compton. Trapanese, who has previously collaborated with Daft Punk on Tron: Legacy and with M83 on Oblivion — as well as creating his own scores for films like Earth to Echo and Insurgent — talked about the dramatic needs of this film and what it was like to have Dr. Dre in his studio during the scoring process.

The Academy’s musical choices were all fine in its first staged concert of Academy Award-nominated music. The problems were the host and the interviewer, neither of whom came off well. My editors chose to leave out my recitation of the more ludicrous moments. This is what didn’t make it into the Variety story:

Film critic Elvis Mitchell, enlisted to interview the composers between segments, was hit-and-miss, getting one of the Arcade Fire composers’ names wrong (“William Phillips”? It’s William Butler) and drawing head-scratching and irrelevant parallels with his favorite Western scores (Ennio Morricone for Gravity, Williams’ obscure The Missouri Breaks for The Book Thief, which could not be farther afield from one another).