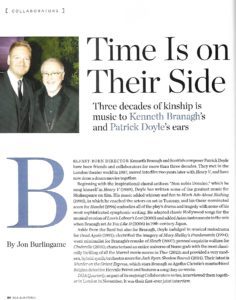 The nice people at Fox asked me to conduct a 40-minute Q&A with actor-director Kenneth Branagh and composer Patrick Doyle after a screening of Murder on the Orient Express in the studio’s beautiful and great-sounding Zanuck Theatre. This was one of those evenings when I was able to remind myself how lucky I am to live here and get to meet (and interview) some of the artists who make the movies we love. Branagh was both articulate and expansive, telling amusing stories about the shooting of Orient Express (and that wild moustache he dons as Hercule Poirot), while the always delightful Doyle talked about working with Michelle Pfeiffer about the song he and Branagh penned for the film’s finale. A large crowd of members from various guilds attended.

I thought Patrick Doyle’s score for Disney’s new live-action Cinderella was the first great score of 2015: rich, sumptuous, filled with the grand romance befitting a fairy-tale princess and her handsome prince. I talked with the composer when he was here in L.A. for the premiere two weeks ago, as well as director Kenneth Branagh (with whom Doyle has enjoyed a nearly 30-year collaboration in both theater and film), and this week Variety published our conversation. I’ve known Doyle since the late 1990s — he is without a doubt one of the funniest men on the planet — and his recent work for Disney (including his delightful music for Pixar’s Brave) is some of his very best.