It’s a bit of a cheat to place this entry under “In Person” because you never actually see or hear me during Danny Elfman’s Masterclass — the veteran composer’s fresh and candid lessons about how to score a film (“music out of chaos,” he calls it). I am behind the scenes, interviewing and prompting Danny on topics, ideas and experiences. He’s looking at, and talking to, me most of the time (fellow composers John Powell and Nathan Barr dropped in later to augment some of my questions with others gleaned from their own professional experiences). It was challenging and fun to be a part of the Masterclass team during a week in June at Danny’s colorful, weird-memorabilia-filled studio in Los Angeles. Producer Amy Scott was my tireless partner in this enterprise, and fellow author Jeff Bond wrote the workbook that accompanies the class. You’ll find it at www.masterclass.com — although if you just want to see Danny’s more general thoughts about his life and career, you can find my two-hour interview with him here. 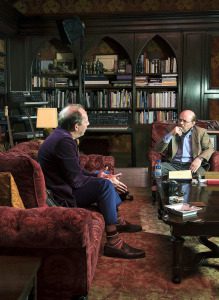