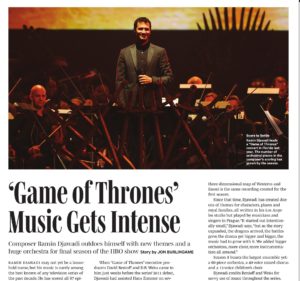 It seems like the whole world is gearing up for the eighth and final season of Game of Thrones, the fantasy series that returns to HBO on April 14. In anticipation of this, I interviewed Ramin Djawadi — who won his first Emmy last year for his music for the final episode of the seventh season — about his history with the show. For this Variety story, he talks briefly (without spoilers) about working on the final season, about what the journey has been like (including a world tour with live orchestras playing the music) and what his top five musical moments in the series have been. Game of Thrones, you’ll not be surprised to learn, has changed his life.