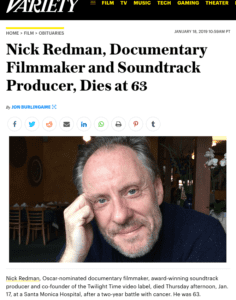 For Record Store Day (April 22, 2017), Lalo Schifrin’s Aleph Label issued a handsome, spectacular-sounding 2-LP condensation of his 4-CD My Life in Music collection from 2012, focusing on his work for films and television. I revised my original liner notes for this special, 1,000-copy limited edition, produced by the one and only Nick Redman. Here is the rundown of what’s on it, and for those of you who don’t have the CD box, it’s well worth tracking down for its 1970s Schifrin rarities (including themes from The Beguiled, Charley Varrick and Concorde: Airport ’79). I really love this set, and what a joy it is to drop a needle on a record again…

Jerry Goldsmith’s thrilling score is the reason I agreed to come aboard for this one. Producer Nick Redman, writer Julie Kirgo and I spent a fun morning talking about the making of this World War I movie starring George Peppard, Ursula Andress and James Mason. It’s a surprisingly good action film, looking and sounding great thanks to Twilight Time’s remastering.

I uncovered a good deal of new information in preparation for the commentary (much of which is not in any of the liner notes for the various LP or CD incarnations of the score). I was able to pinpoint the London recording dates as Friday, Saturday, and Monday, March 25, 26 and 28, 1966. And the concertmaster, interestingly enough, was David McCallum Sr., first violinist of the Royal Philharmonic and the London Philharmonic at the time. His son had achieved worldwide stardom as Illya Kuryakin on The Man From U.N.C.L.E. — which had a theme by none other than Jerry Goldsmith.