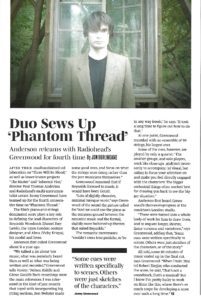 Radiohead’s Jonny Greenwood, who rarely grants interviews, made an exception to talk to Variety about his music for Paul Thomas Anderson’s new film Phantom Thread, starring Daniel Day-Lewis in what may be his final acting role. Greenwood was fascinating, talking at length about his mostly piano-and-strings score for the period piece about an enigmatic London couture figure and his model/lover. Of Greenwood’s four films for Anderson (including the remarkable There Will Be Blood), this score stands the best chance to get the composer his first Oscar nomination.