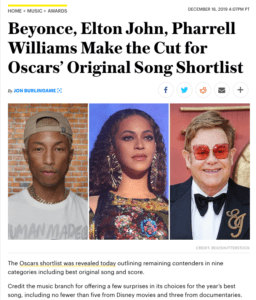 Every year at this time the Academy announces its “shortlists” in music (and other specialty areas including visual effects, makeup, documentaries, short subjects, etc.). This year, 170 scores and 75 songs qualified under the rather stringent Oscar rules. My initial story, a Variety exclusive, detailed the six major scores (including Captain Marvel, A Hidden Life and The Irishman) and one song (“One Little Soldier” from Bombshell) that were either disqualified, not entered, or entered too late. My second story was one of those instant-analysis pieces posted an hour after the shortlist announcement: notable omissions, including Taylor Swift’s new song for Cats and John Powell’s fine score for How to Train Your Dragon: The Hidden World, topped the list.