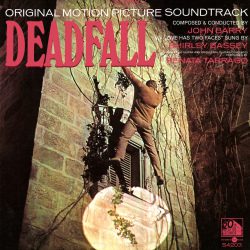 John Barry composed four scores for 1968 films, all very different and all outstanding: Petulia, which caught the San Francisco ’60s zeitgeist; The Lion in Winter, a period drama that won the best-score Oscar; Boom!, a strange Burton-Taylor vision of a Tennessee Williams play; and Deadfall, which offered the extraordinary opportunity of writing a single-movement guitar concerto timed to an elaborate house robbery. Michael Caine was the star. This CD replicates the original Fox LP but adds a couple of early demos. I interviewed Barry for more detail about the process than we had ever previously known.