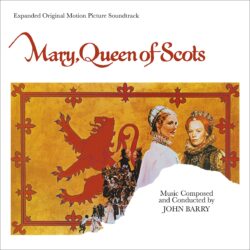 John Barry’s 1971 score for the Vanessa Redgrave-Glenda Jackson movie about 16th-century English and Scottish history has been released twice before: In its original Decca LP format, and on CD by Intrada in 2008 (with liner notes by yours truly). Thanks to the recent discovery of previously unknown tape reels in Universal’s vaults, the enterprising Quartet label has now issued an expanded edition including all of Barry’s Oscar-nominated score. It’s the third and final film of what I think of as Barry’s historical-drama trilogy (also including The Lion in Winter, 1968, and The Last Valley, 1971), all of them magnificent and worthy of revisiting.