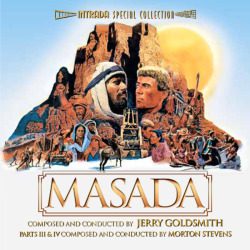 Long in coming, but what a soundtrack package! Jerry Goldsmith’s stunning, Emmy-winning music for Parts I and II of the great ABC miniseries, coupled with Morton Stevens’ equally impressive, Emmy-nominated music for Parts III and IV. This was the era (1981) when big stars and great scripts combined for truly memorable television. And in this case really powerful music to underline the drama and the tragedy of a historical event. I was honored to contribute (including providing some of the artwork you see in Joe Sikoryak’s wonderful booklet). I loved Jerry’s London re-recording, but this is the whole thing, and you can’t go wrong with that.