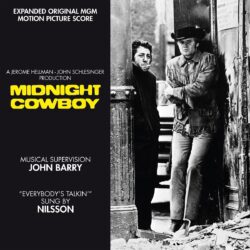 John Barry’s Midnight Cowboy score has always been a favorite of mine, so when Quartet Records informed me that they were going to do an expanded edition of the classic, Grammy-winning 1969 soundtrack album, I leaped at the chance to be involved. I wrote a 3,900-word essay that — I am proud to say — is the most detailed look at the creation of that soundtrack (both songs and score) that has ever been attempted. I tracked down director John Schlesinger’s assistant Michael Childers, who amazingly had several photos he took during the recording sessions (and which we reproduced in the booklet) as well as wonderful recollections of the shoot and the music. I was thrilled to receive my second Deems Taylor Award for outstanding music journalism for these notes.