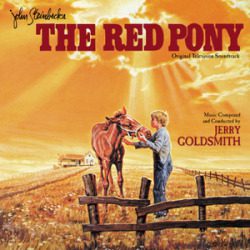 Sheer joy: That’s how best to describe my introduction of this obscure Jerry Goldsmith television score to friends, especially David Newman, who wound up creating a suite for live performance and conducting it with the American Youth Symphony in 2010. I talked to Jerry about it in some of my interviews, and when producer Bob Townson unearthed the original tracks for the album, I was happy to contribute. Jerry won his first of five Emmy Awards for this wonderful Americana score.