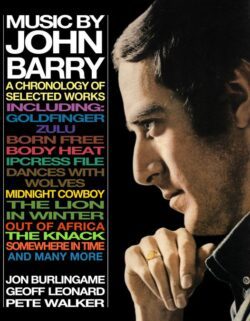 I was thrilled to collaborate with my UK friends Geoff Leonard and Pete Walker on this book. They wrote the definitive Barry bios, The Man With the Midas Touch and Hit and Miss: The Story of the John Barry Seven, about this tremendously important British composer. Music by John Barry takes an in-depth look at 42 of his scores; I covered 20 of them, along with writing the introduction (based on an interview I did with Michael Caine) and afterword. My contributions included many of the classics: Born Free, The Lion in Winter, Mary Queen of Scots, Somewhere in Time, Body Heat, Out of Africa, Dances With Wolves and several other favorites that are not as well remembered but equally significant in his oeuvre (Deadfall, Alice’s Adventures in Wonderland, Frances and others). This was a true labor of love, and maybe the most fun I ever had writing a book.