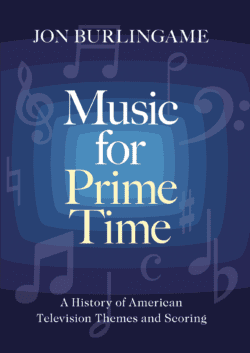 Music composed for television has, until recently, never been taken seriously by scholars or critics. Catchy TV themes, often for popular weekly series, were fondly remembered but not considered much more culturally significant than commercial jingles. Yet noted composers like John Williams, Henry Mancini, Jerry Goldsmith and Lalo Schifrin learned and/or honed their craft in television before going on to major success in feature films.

Music for Prime Time is the first serious, journalistic history of music for American television. It is the product of 35 years of research and more than 450 interviews with composers, orchestrators, producers, editors and musicians active in the field. Based on, but vastly expanded and revised from, an earlier book by the same author, this wide-ranging narrative not only tells the backstory of every great TV theme but also examines the many neglected and frequently underrated orchestral and jazz compositions for television dating back to the late 1940s.

Covering every series genre (crime, comedy, drama, westerns, action-adventure, fantasy and sci-fi), it also looks at music for animated series, news and documentary programming, TV-movies and miniseries, and how music for television has evolved in the era of cable and streaming options. It is the most comprehensive history of television scoring ever published.

“A remarkable history of music in American television from its infancy to the present day. The book connects every conceivable television genre with the composers who made these shows memorable to the viewing public. In each chapter, Burlingame creates compelling historical narratives while also spinning intimate portraits of its music makers. As informative as it is entertaining, this will be an invaluable resource for television studies for years to come.”

“Part analog database, part rollicking scavenger hunt (you can find nuggets like Henry Mancini’s well-timed haircut, which led to the Peter Gunn theme and essentially Mancini’s subsequent career, or Yul Brynner’s surprising design skills), this fast-moving survey is a rich source of quick-fix facts, large-scale historical arcs, and more than a few enticing side trails for the rest of us to explore.”