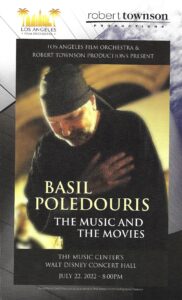 It was one of the most memorable evenings at the Walt Disney Concert Hall in ages: a celebration of the music of Basil Poledouris, whose brilliant scores for such films as Conan the Barbarian and The Hunt for Red October, and television including Lonesome Dove, were among the greatest of the 1980s and ’90s. Basil died before his time, in 2006, and I am still sad about his passing. I knew him fairly well (he even came to my wedding) and I interviewed him often. (Our 1997 documentary on him can be viewed here.) This Robert Townson-produced concert featured all of his greatest hits, and it was a joy to be reunited with his widow and daughter. I was part of a trio of people who loved him (music executive Doreen Ringer Ross and agent Richard Kraft were the others) who talked about his life and career during a pre-concert talk.