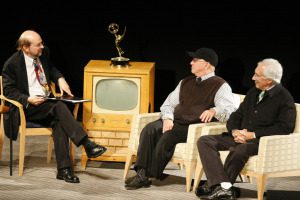 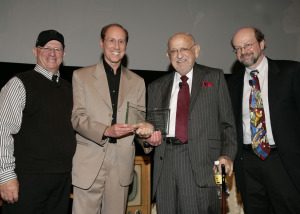 My first book was about TV themes, so it was a special honor for the Television Academy to invite me to participate in an evening celebrating that unique art form with some of its greatest practitioners. Earle Hagen (The Andy Griffith Show, The Dick Van Dyke Show) received a special award “for his pioneering work and enduring contributions,” and part of my job was interviewing Earle onstage, as well as longtime collaborators Mike Post and Steven Bochco about their work on shows like Hill Street Blues and L.A. Law. Vic Mizzy brought the house down with his amusing anecdotes about scoring The Addams Family and Green Acres. Here’s a story a 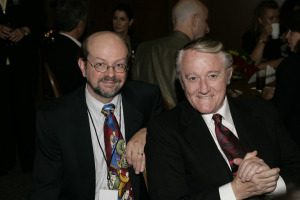 bout the evening, and here’s a great BMI photo op with both Post and Hagen.

One of my favorite moments was when Robert Vaughn, introducing the spy-TV segment, was summoned to the podium by his old Man From U.N.C.L.E. pen communicator. Writer Arthur Greenwald, like me, was a great U.N.C.L.E. fan, and he supplied the prop; the audience loved the gag.