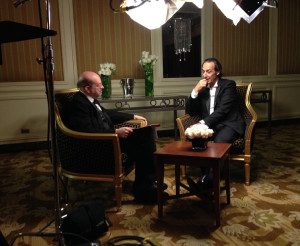 On May 13, I interviewed Oscar-winning composer Alexandre Desplat for BMI, just hours before the performing-rights society presented him with its Icon Award for career achievement. I have interviewed Desplat many times over the years, but he was especially forthcoming and (as always) charming in this setting. Here he talks about how he got into the business, how he approaches each new film, working with Wes Anderson (for whose film The Grand Budapest Hotel he won the Oscar) and advice for young composers. While you’re at that page, click on the other videos; I did all of BMI’s red-carpet interviews and there is some really fun stuff there.

Now that the 87th Academy Awards are in the record books, a rundown and a little historical perspective. The hot ticket for music mavens on Oscar weekend is always the Society of Composers & Lyricists’ champagne reception for song and score nominees, and we were delighted to attend again this year. Then, last night’s ceremonies, which included plenty of music including performances of all five nominated songs. “Glory” was especially moving for those in the audience, and won the gold statue moments later. Composer Alexandre Desplat beat the odds by winning (for The Grand Budapest Hotel) despite having two nominations this year. I talk about that, and other musical details of the show, in this weekend wrapup.